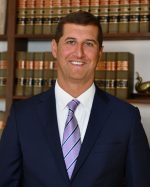 As a shareholder in Glassman, Wyatt, Tuttle & Cox, Ed Wallis focuses his practice on civil litigation and contractual drafting and review for his clients.

Ed is passionate about his clients and the practice of law.  Trained in his teenage, college and law school years by his father (who practiced law for nearly 50 years), Ed learned the importance of dedication to clients at all times – days, nights, weekends and holidays. As a law clerk for a federal judge, Ed honed his writing and analytical skills further.  He joined GWTC in February 2006, and since joining has been molded into a trial lawyer that pursues creative and efficient handling of legal matters both large and small.  Ed handles each case the same – whether a small matter or a complex, multi-state dispute – with dedication, tenacity and focus.  Each of his cases has a plan from the outset – created by he and his team.  He allows the plan to evolve over the duration of a case – using the Firm’s resources and talented attorneys to best represent a client.

He is licensed in Tennessee, Arkansas and Kentucky (and has tried lawsuits in all three states). He has also appeared on behalf of clients in a number of states — California, Texas, Oklahoma, Iowa, Ohio, Georgia, Tennessee, Arkansas, Kentucky, Florida, Maryland, Pennsylvania, New Jersey, New York and Massachusetts. He is honored to have developed a network of skilled lawyers across the nation over his career to assist him with matters.

Ed’s practice is broad as he, like others in his firm, seek to represent clients passionately in the courtroom and elsewhere for a variety of practice areas. Over the past several years in particular, Ed has handled a number of cases involving construction defect claims, transportation law, apartment premises liability, legal malpractice, medical malpractice, real estate litigation and banking litigation, commercial litigation (including franchise and dealership disputes) and employment contractual litigation (noncompete and alleged disclosure of confidential, trade secret information).

Ed is AV rated by Martindale Hubbell, the highest professional rating that can be achieved through peer ratings and reviews. He has also received the Award of Best Lawyers in America for Commercial Litigation, Construction Litigation and Real Estate Litigation.  In 2020, he was named the Attorney of the Year in Memphis for Real Estate Litigation. He is a proud member of the Themis Advocates Group, a national association of trial attorneys.

During his career, Ed has helped many clients including:

Ed Wallis, born and raised in Jackson, Tennessee, is married to Jenna and the proud father of two sons, Edwin and Butler. When not practicing law, Ed can likely be found cheering on the Tennessee Vols and Memphis Grizzlies. He also is an endurance athlete and triathelete, having competed numerous races including 13.1, 20k, 25k& 50k (30 mile) running races, a 10 mile Spartan race, and multiple 70.3 half Ironman triathlons in Tennessee and Louisiana. He is currently training for a 140.6 mile Full Ironman race to take place in November 2022 in Tempe, Arizona.