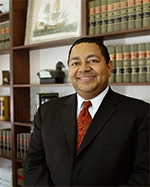 As a shareholder in Glassman, Wyatt, Tuttle & Cox, Robert Cox is a trial lawyer that leaves no stone unturned when helping his clients.  Robert’s commitment to his clients goes beyond his passion and dedication during the litigation process.  Not only does he help educate his clients on each step of a particular matter and evaluate the matter using his over 25 years of experience, he stands ready to go into the field whenever needed to give his clients the upper hand.  Robert’s commitment may range from on the scene accident observation and investigation, to wearing work boots in many environments, to appearing before a jury to argue on behalf of his clients.  Helping clients in the Tri State Area, Robert is licensed in and has tried lawsuits for clients in Tennessee, Mississippi and Arkansas.  He regularly handles some of the firm’s largest matters, including complex transportation litigation, business litigation and contract review, serious personal injury and premises liability litigation, nursing home litigation, professional malpractice, and more.  Robert is AV rated by Martindale Hubbell, the highest professional rating that can be achieved through peer ratings and reviews.  He is also rated by Best Lawyer’s in America. A few of Robert’s accomplishments throughout his career include: