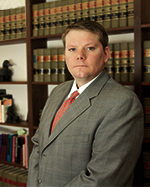 A shareholder in Glassman, Wyatt, Tuttle & Cox, P.C., Lewis Lyons has been with the firm since his graduation from law school. During that time, Lewis has assisted both corporate and individual clients in a variety of areas. Born in Shreveport, Louisiana, Lewis moved to Memphis in 1998 to attend Rhodes College. He decided to stay in Memphis and graduated from law school at the University of Memphis in 2005.

While his experience is diverse, Lewis focuses his practice on premises liability, transportation litigation and legal malpractice defense. He has been appointed by state and federal courts as Guardian Ad Litem for more than 100 minor children seeking settlement approval. Lewis has tried, including as lead counsel, commercial and personal injury cases in jury and bench trials in state and federal court.

Some of Lewis’s achievements through his career include: