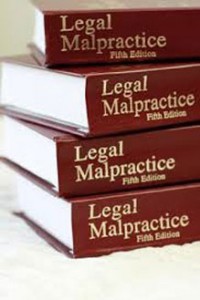 In Davidson v. Baydoun, M2014-01486 (on appeal from Circuit Court from Davidson County, Tennessee) (Baydoun II), the Court of Appeals was asked to review whether a plaintiff timely sued a lawyer for legal malpractice. Spydell Davidson, the client, sued Mid-South Industries, Inc. for breach of contract and fraud. See Davidson v. Baydoun, 2009 Tenn. App. LEXIS 526 (Tenn. Ct. App. May 5, 2009) (Baydoun I) Davidson initially filed his Complaint pro se but eventually chose attorney Naden Baydoun to represent him. Id. Signs of Davidson’s discontent with Baydoun surfaced as early as September 2006 via letters from client to lawyer. Nevertheless, Davidson allowed Baydoun to continue as his lawyer. Id.

The underlying case was tried on June 21, 2007. During the trial, Davidson complained to his attorney about his sub-par performance, including his failure to present evidence on damages. Id. The Court found for Davidson from the bench, but did not enter an Order awarding damages until August 23, 2007. Id. Damages totaled $49,088.02, which was less than Davidson contended he was owed. One week later, on August 30, 2007, Davidson sent a letter to his counsel stating he had been damaged by Baydoun’s negligent representation. Davidson sued his lawyer for damaged on August 12, 2008. Id.

The parties conducted discovery in the legal malpractice case, which revealed that Mr. Davidson knew as early as July 31, 2007 that he had sustained an actual injury due to Baydoun’s negligence. Baydoun II, at 3. Discovery, for example, revealed a letter from client to lawyer stating that Mr. Davidson would “expect all my losses from this unjust lawsuit to be paid by” Baydoun. Id. In his deposition, Mr. Davidson confirmed the letter’s intent, and also testified that he was damaged because of Baydoun’s failure to sue Mid-South for fraud. Id. Mr. Davidson testified that in September 2006, he thought Baydoun was “doing a horrible job” and costing him “a lot of money.” Id.

In Tennessee, an action for legal malpractice against an attorney must be brought within one year from the date the cause of action accrues. Tenn. Code Ann. 28-3-104(c). A cause of action accrues and the statute of limitations begins to run when (1) a defendant attorney deviates from the accepted standard of care, (2) this deviation/negligence causes the plaintiff to suffer a legally cognizable, actual injury, and (3) the plaintiff knows, or in the exercise of reasonable care and diligence, should have known that the injury was caused by the defendant attorney. See Hartman v. Rogers, 174 S.W.3d 170, 173 (Tenn. Ct. App. 2005).

In Baydoun II, the Tennessee Court of Appeals reviewed “deposition testimony, answers to interrogatories, admissions, and documents contained during discovery.” Baydoun II, at 4. In so reviewing, the Court found that there was no dispute that Mr. Davidson knew as late as July 31, 2007 that Baydoun’s actions or omissions caused him actual damages.

The Court of Appeals noted that “an actual injury may . . . take the form of the plaintiff being forced to take some action or otherwise suffer ‘some actual inconvenience’ such as incurring an expense, as the result of the defendant’s negligent or wrongful act.” Cardiac Anesthesia Servs., PLLC v. Jones, 385 S.W.3d 530, 541 (Tenn. Ct. App. 2012). The Court of Appeals summarily noted that Mr. Davidson incurred an injury as of July 31, 2007 following its quotation from the Jones case. It seems reasonable to assume that Mr. Davidson’s letter and deposition testimony satisfied the elements. Davidson testified, for example, he had to pay unnecessary fees to Baydoun based on Baydoun’s failures during the case. Also, Davidson also admitted he knew by July 31, 2007 that he lost out on damages available to him.

For questions or to contact our firm, please fill out this form: