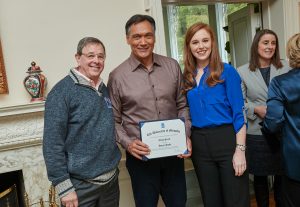 The cast members of Bluff City Law who play attorneys on the NBC legal drama were surprised on the last day of filming with certificates from the Cecil C. Humphreys School of Law, making them honorary alumni.  Katherine Schaffzin, Dean of the Law School, presented the certificates, joined by Firm attorneys Richard Glassman and Lauran Stimac, who serve as technical advisors on the show.  Bluff City Law has showcased many Memphis landmarks in its first season on NBC, and its story lines have touched on timely issues, including the First Amendment and compensation for college athletes.

You can read more about the end of Season One’s filming by visiting this article from WMC TV 5.

The Firm is pleased to share the following photos: