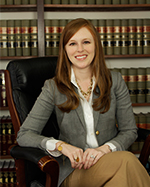 Lauran Stimac and Richard Glassman also serve as technical advisors to the cast and crew of the NBC drama Bluff City Law, which is set and filmed in Memphis.

In addition to her law practice, Lauran Stimac is an active member of the Junior League of Memphis.  She serves as a board member of the Memphis Area Legal Services Board of Directors (past), the Memphis and Shelby County Sports Authority Board, and the Alumnae Board of St. Mary’s Episcopal School.  She also serves as a volunteer and a supporter of the Memphis Area Legal Services Campaign for Equal Justice, the Memphis Child Advocacy Center, Porter Leath, and the Kappa Kappa Gamma Alumnae Association of Memphis’ Literacy Is Key initiative.  She is also active in Carnival Member as a board member.