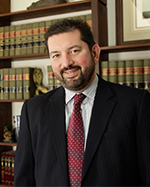 Born in Londonderry, Northern Ireland, Tom Clary is an Associate at Glassman, Wyatt, Tuttle & Cox, P.C.  Tom is an active professional musician, having played professionally with The Temptations, Four Tops, Martha Reeves and the Vandellas, Johnny Mathis, Barry Manilow and Ann Peebles. When not playing music or helping musicians with their contractual and business needs, Tom has an active law practice at Glassman, Wyatt, Tuttle & Cox, helping his clients in a number of diversified areas. Some of Tom’s achievements through his career include:

Tom is married to Anita Clary and is the father of two children, Brenna and Avery.  As mentioned above, Tom is a professional musician and regularly plays trumpet around the nation, including at the American Bar Association Annual Meeting in 2014.