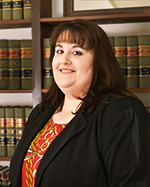 Shareholder Ronna D. Kinsella joined the law firm of Glassman, Wyatt, Tuttle & Cox P.C. as an associate attorney in June of 2010. Prior to joining the Firm, Ronna worked for a local Memphis firm practicing primarily in the areas of products liability, catastrophic personal injury/wrongful death, and complex commercial litigation. She also previously worked with two other local firms handling cases in the areas of bankruptcy, family law, personal injury, and medical malpractice. Ronna currently enjoys a diverse practice, assisting individual and corporate clients in the areas of transportation law/trucking defense, products liability, professional malpractice defense, business litigation, personal injury/wrongful death, premises liability defense, entertainment law and appellate work. Although the majority of Ronna’s work is from the defense side of civil litigation matters, she regularly takes on a select number of cases on the plaintiff’s side as well. Her experience in such diverse practice areas and on both sides of litigation allows Ronna to provide her clients with a unique, multidisciplinary approach to the effective, efficient resolution of their disputes, regardless of the complexity or novelty of the issues they face.

Since graduating from the University of Richmond, T.C. Williams School of Law in 2005, Ronna has successfully represented clients at both the trial and appellate level throughout Arkansas, Mississippi and Tennessee in both state and federal courts. She has been selected as a Mid-South Super Lawyer Rising Star, limited to 2.5% of all Mid-South attorneys in practice 10 years or less or aged 40 or under, for each of the last six years, where she is considered one of the top rated transportation attorneys in the Memphis area.

A few of Ronna’s accomplishments include:

In addition to her practice, Ronna has served as a volunteer for local Wills for Heroes and free legal clinics in the area and presented a CLE to recently admitted attorneys on Ethics in Discovery. An avid dog lover, Ronna supports several animal rescue organizations in the Memphis and surrounding area. She is the proud “mom” of three rescue pups as well as a German Shepherd pup named Keegan she’s training to become a therapy dog.