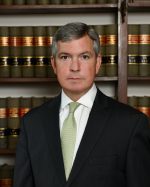 Michael Higginbotham has tried over 100 cases to judges and juries in state and federal courts.  Having practiced law since 1993, he came to the firm after 15 years with the FedEx legal organization, in which he served as both first chair trial counsel and as a manager.  Most recently, he served as Managing Director of Government and Commercial Litigation for FedEx Ground.  He has litigated matters in courts all over the country, including consumer class actions, government enforcement actions, and commercial and cargo loss claims. His transportation law expertise includes a unique understanding of liability issues and the doctrine of federal preemption under the Airline Deregulation Act, FAAAA and Carmack Amendment.  He has deep experience in litigated disputes between surface carriers and their independent operators.  Prior to his tenure with FedEx, Michael’s practice included the defense of professional negligence, product liability, insurance coverage, and personal injury claims in the state and federal courts of Tennessee.

Michael is a member of the International Association of Defense Counsel and is a past member of the Tennessee Bar Association Committee on Ethics and Professionalism and the Leo Bearman Sr. American Inn of Court.