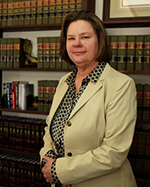 2Lori J. Keen was born in Paducah, Kentucky and raised on beautiful Kentucky Lake in Western Kentucky.  Lori, who is licensed in Tennessee, Arkansas and Kentucky, has three decades of jury trial and bench trial experience and has tried cases on a number of topics.  Ms. Keen also has significant arbitration experience.  She has routinely helped transportation clients in a number of trucking litigation disputes across Tennessee and Arkansas, and she is also heavily experienced in both serious premises liability litigation (including on behalf of large hotels and international fast food chains) and nursing home litigation.  Lori Keen is a Kentucky nursing home attorney.  As noted below, Lori has been recognized by Martindale Hubble as achieving an A.V. ranking, which is the highest award a lawyer can obtain based on surveys and peer reviews submitted by attorneys and judges.  Some of Lori’s achievements throughout her career include: