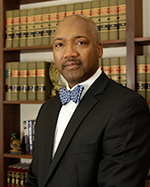 Donald Babineaux joined the firm in 2007 after practicing for five years in Alabama.  Since he has been associated with the firm as a trial attorney, Donald has handled hundreds of cases across the State of Tennessee in both state and federal courts, as well as claims before administrative tribunals.  His focus has been on providing quality, efficient, and effective representation to his clients.  During his career, Donald has helped clients in a variety of ways, including:

In his spare time, Donald enjoys playing golf and cooking.  As a native of south Louisiana, he is particularly fond of Cajun cuisine.  In 2013, Donald placed third in the poultry division of the Memphis in May World Championship Cooking Contest with his entry of a gumbo infused Cornish hen.