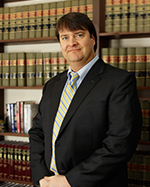 David Riley is a Shareholder with Glassman, Wyatt, Tuttle & Cox, and is experienced in a number of areas of law.  David handles Jones Act cases on behalf of those injured in maritime settings, including barge injuries, tugboat injuries, ship injuries and more.  David is also a leading Worker’s Compensation Attorney within the firm.  David was born and raised in Ridgely, Tennessee, and has handled a number of cases from start to finish for the firm and its clients.  In his career, David has assisted his clients in a number of ways, including:

David is married to Mary-Marsha Riley.